We've had a month of extremes. Warm and cold. Light and darkness. Joy and sorrow.  Our darkness and sorrow comes from the natural darkness of winter coupled with the death of my dad's younger brother Uncle Andy who learned of his leukemia this past year and passed away a few days ago. Death is rarely timely, and I feel deep sorrow for my Aunt Cindy and my cousins who have lost a father and husband. This also weighs on my mind as I appear to have escaped an early death by the bizarre circumstances that led to the discovery and removal of my cancer before it was advanced enough to seed itself elsewhere, the typical outcome in the hard-to-discover-early ovarian cancer. It's pretty much impossible for me to assign a responsibility for my living and Andy's (and the others I know who have passed this year) dying to anything other than it being a odd and cruel and wonderful and unpredictable world. These thoughts and many more have been circulating in my mind for days and weeks.
The light and joy and warmth have come from our moving from the condo to a house! I hadn't really appreciated how much I disliked living in the condo until we were settled in the new place. There's something hard to quantify about what makes a good space, but I know that it has a very very real impact on my personal happiness. Elements of importance: wood floors, a wood stove, big windows that look out on space, a kitchen that feels clean (when I've managed to get ALL the dishes rounded up and washed), enough storage space that clutter feels put away, my furniture and  belongings and art, which are not expensive but are mostly made and given by family and friends and of great sentimental value, plans for chickens soon and a pantry/freezer full of food (since a bare pantry puts me into a mild unsettled panic). It's also come from holidays celebrated and upcoming celebrations with family and friends, and the making of new friends and feeling more at home in general here on the island. 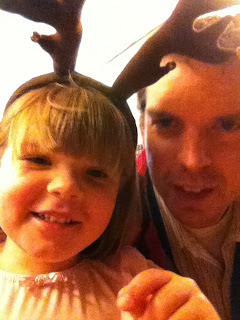 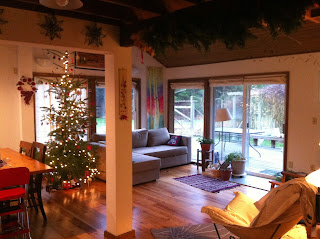 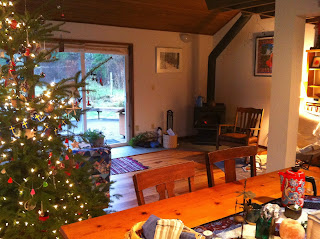 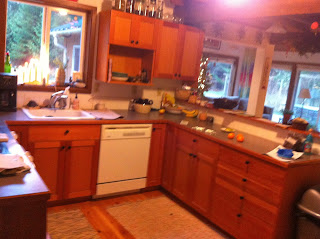 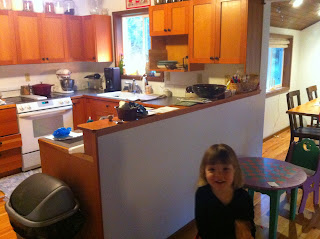 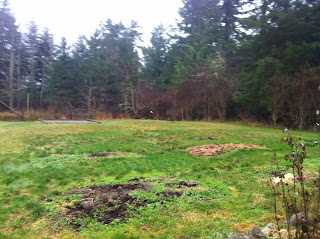 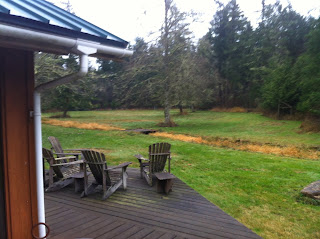 There's more of the house to show, but that part is definitely not clean enough for photos today. Along with being adorable and wonderful, Julia has developed an amazingly loud and shrill whine voice and an overly dramatic reaction to every "no" she hears. This mostly comes into play at home. Out and about she's sweet and well behaved, but here with me it is scream and whine and pout and nag all day. I'm not terribly patient with her about this and as a result use of time-outs has skyrocketed. Thankfully they have a dramatic effect on her. She cries for a minute and then is contrite and tells me she's ready to try again and we have a hug and a reasonable chat about how to behave when we want something or when the answer is no and all is good and 10 minutes later it's replayed from the beginning. I count my blessings that I have this tool and that it makes her contrite. I have no idea what parents do when their kids are seemingly immune to the correction. She's still too uncertain of the yard to want to play outside alone, so I've been trying to spend more time outdoors with her. This was pretty difficult right after thanksgiving as the temps plummeted here. Now they are mild again, but it's damp and I find that less enjoyable than good old dry cold winter. I'm hoping badly for some snow to fall this winter. I'm told that some years there's a few good snow falls and some years there's basically none.
One cute little Juliaism lately is that instead of "them" she says "deys" as in "I got deys in my hand" or "can you get deys for me" She didn't always say it like that, and I'm not sure where it came from, but it is pretty cute, so I don't correct her!
I've been working on the idea of giving presents with her, a rather difficult concept for her to embrace. She likes the idea in theory, but when she sees me wrapping something that appeals to her in any way, the thought that it isn't for her is pretty hard for her to take. Last week at preschool, while I was the parent helper, they made necklaces out of beads and then wrapped them to give as gifts. She decided hers was for "mom and Julia." At the end of class, her friend Jack decided that his necklace was a gift for Julia and gave it to her. She was pretty thrilled with this and we went home and made and wrapped a necklace for Jack. Thankfully when she gave it to him, he was thrilled and wore it all day. While this exchange was a success, she's still having a hard time with seeing me making presents that are not for her and having a hard time with the idea of making presents for others herself. I'm trying to talk about it a lot with her, but it doesn't seem to register much. She did ask if the baby would get presents and was happy when I said yes, I thought so. She suggested dividing the presents under the tree in half, to share with the baby. and to share the easter candy with the baby too. So I don't know if I should be worried about this or not!
The baby seems to be doing well, kicking lots but causing no trouble otherwise. I'm about 23 weeks along, making the baby roughly 11 inches long.
Posted by Mary at 8:10 PM No comments: