Its been another crazy month at the Sather home. We changed our original plan, which was to move all the stuff labor day weekend, to moving all the stuff the last week in July. This was good because this way Dave could help me with it all, but in August, he'd be pretty tied up with work. This was bad because it gave us 7 days to pack the remaining 75% of the house. So we did, and moved on schedule, but it was crazy crazy crazy. We moved all the stuff up to Dave's Dad's house, the same place we moved it all from last August. He was and is really great about letting us stash various quantities of stuff for various lengths of time at his place, which I've been doing for pretty much exactly as long as I've known him. This is necessary, as we've lined up a furnished condo to rent until May. I'm not one to lust for condos, but this had a lot of perks: low (winter) rent, close proximity to everything, and enough time for us to figure out where we really want to be long-term before we haul everything out to the island. It's not available until the end of August though, so Dave is hopping from campsite to campsite this month and Julia and I are hanging out in a 98% empty house until the end of August. Here's the pictures from about mid July on: 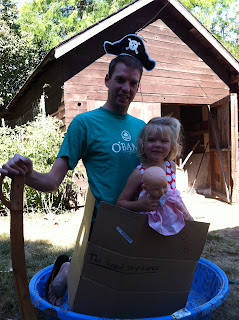