Sorry for the radio silence here, but my computer is back in the repair shop with some mysterious symptoms. That is the sound of Dave tearing his hair out at my having yet another apple product issue. (Remember when the bus ran over Dave's laptop? Remember when Julia tipped over a water bottle on my computer? Dave remembers these and more.) as such, I'm learning to blog on my iPad. 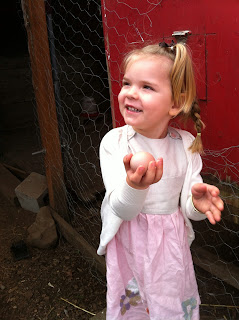 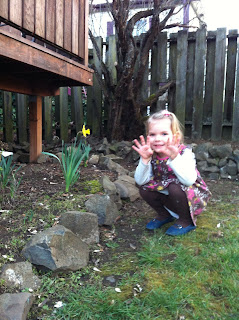 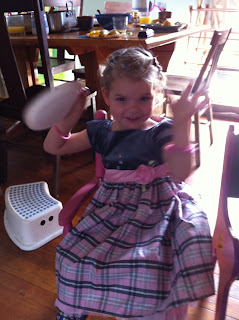 Spring has come to Mosier, flowers are blooming, peas are planted, seeds are started and growing rather alarmingly fast. Next year I will restrain myself to one seed per cell instead of the three or four I allowed this year, necessitating transplanting and thinning already! I got eager and started pumpkins in peat pots and the tap root busted out in short order! They have been moved outside already under the cover of plastic containers. Our little silky chicken has gone broody, which is when they desperately want to be a momma and sit on a nest all day. Since we have no rooster it's never gonna happen with her eggs, but we do have a friend with a rooster who gets fertilized eggs and I've decided to see if I can't get her to hatch a few of those! I'm building her a little nesting pen out of some scrap wood and when it is done, I'll move her in and hope she takes to the new nest. Then we'll slip some fertilized eggs under her at night and with some luck, in about 20 days we'll have baby chicks and a momma to take care of them!
Julia's been busy playing outside. She runs out by herself which I love and am slightly anxious about all at once. She has a little patch of dirt where she digs and I got hear some little plastic flower and jewel bits to bury, to hopefully stop her from burying the eggs. This has been a big hit so far. She will play by herself for hours on a nice day, climbing the rocks in the yard, then running off to another corner. I can see her mouth moving but can't get close enough to hear the internal dialogue. 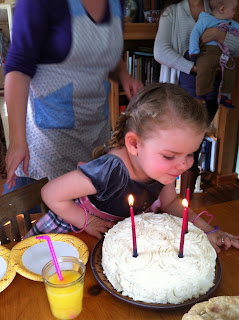 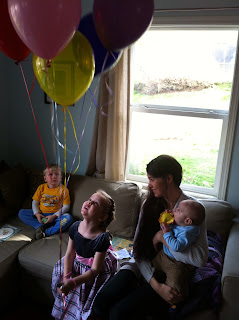 We celebrated Julia's third birthday this week by throwing a party for some of her little friends and their parents. It was on Dave's actual birthday, but he didn't sem to mind sharing! Her actual birthday is the 22nd, but that is in the midst of spring break travels. She LOVED her party. It had all the things she loves best: a new pretty dress, her little friends, food, cake, balloons, babies and presents. For being a herd of two and three year olds, the party went quite smoothly. It was from 10 to 12, we served brunch with rainbow fruit skewers, finger sandwiches: egg salad and pbj, I'll smokie hot dogs, cheesy potato bake, salad, mimosas, white cake with raspberry jam filling, raspberry pie and apple cranberry pie. The kids played and played and played and ate and played. The adults schmoozed and ate and played. It was a pretty great time, if I do say so! There were 5 toddlers, two babies, 8 adults and that was plenty! 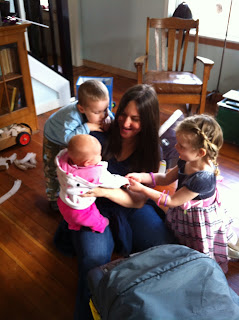 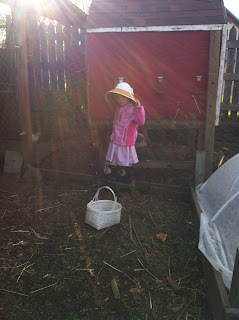 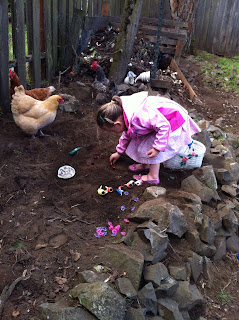